In primary school at Porcheville, there’s a childcare where your children can do their homework until 6:00 P.M.

For more informations, fill in a form on our website.

Thank you for reading. 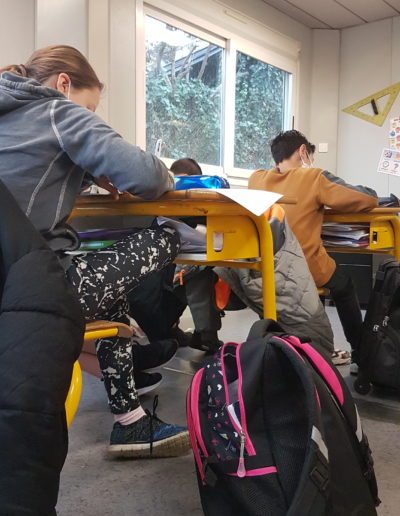 The Coming of the Museum Val d’Oise to the College

For the first time, the museum of tools gave us some boxes with activities, things that we’ll see:

That morning, there were some plastics bags on the tables where Lego’s with plans were inside them.

The idea of this activity was to recreate a real roman thermal bath (Roman’s public baths) found many years ago. (Sorry, I can’t remember were the real thermal bath is because it existed).

We were in little groups (around two people) and each of them had to do a part of the construction.

When all were assembled, the teachers explained to us the functions of this building:

For exemple, there were three rooms (The first was the coldest, the second was hot and the last was very hot, near to the oven), a basement, …

With this activity, the museum also lend us items that Romans use in thermal baths and our teachers explained how to use them(not the real items, except some hairpins which were very old! Maybe around two thousands years ago!). We could touch them.

A second time, a speaker came and showed us every kind of animals using a big memory game. On the cards, the latin name of the animal and its family, a drawing of the animal’s skeleton and a description of it were written.

Next, we put the cards in a big chart in orders. It was very interesting. There were some others activities too…

Thank you for reading. I hope it interested you.